Drink deep of my sorrow as I entertain you with tales of Japanese Animated debauchery. 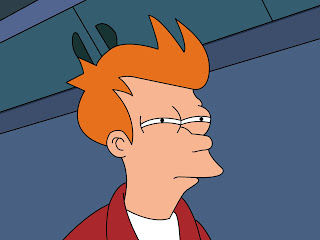 (Such is the appropriate reaction to sad and weird ass news like almost every anime company I supported since I was eleven years old tanking in Bankruptcy and pulling their stock from the market.)

Losing a friend is always hard, losing a friend in an industry is also hard. Watching a fledgling industry you're obsessed with fall into a downward spiral sucks. It sucks hard.

Starting sometime in 2008 (give or take), the market took a turn. "It's nothing," says the government. So the wheels began turning sending us into a nationwide depression that apparently is affecting the rest of the world.

Without wandering into the serious political screw-ups leading up to this problem and the insanely idiotic choices that followed from the new guy in charge... One of the early indicators for nerds that the shit was hitting the fan was when business began being eaten by other businesses. The point that the alarms went off was when multiple businesses began filing both Chapter 7 and Chapter 11 Bankruptcies.

So it was that the anime industry took a massive blow in the USA. Japanimation Giants ADV Films and CPM filed for Bankruptcy. With other teetering on the edge to this day.

What does this mean to you? Well, it means that your once overwhelming access to anime libraries have been significantly stunted.

Don't slit your wrists because potentially this can only mean the formation of something much better. But as of this moment, your stuff isn't readily available and it will probably be several years before these massive libraries of anime come back on the market domestically given all the madness with the licenses and potential bankruptcies of the original license holders in Japan.

I'm nostalgic for all the stuff from the early nineties and if I could make hot, sticky love to one institution of anime distribution it would have been ADV Films. They pushed the quality of DVD menus, audio quality, dub scripts, special features, etc. way past the bar set by all those OTHER guys. Also their library was magnificent.

I know it's weird, but ADV changed my entire attitude towards the art of the english dub and demonstrated that the only thing holding back other distributors was themselves and the effort they were willing to apply to the adaption and presentation. They made stuff I would normally avoid watching at all costs not merely BEARABLE, but enjoyable!

Uh, anyway, I'm gonna stop ranting a bit here. Reserving the right to come back and update this so it seems like a more... logical and reasonable post. Or maybe not. Maybe I'll just rant some more.

Find me on Xbox Live

Me, hanging with terrorists from the ruthless COBRA organization.

Tekyu Inajar
Phoenix, Illium, United States
I'm a lot of things; primarily I'm a massive nerd and that will define a lot of what I write about on here. Outside of this I am a Writer, a journalist, Toy collector/seller, blogging coach and social media consultant. I am currently writing and co-writing numerous book projects, but my most important work to date is the book I'm finishing for my late father who passed away in September of 2011, mere months before my wedding that December. I'm also tied to upcoming films projects and have friendly connections with local conventions in Arizona having been groomed into the business by one of the managers of the San Diego Comic-con.